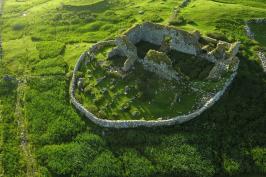 Teampall na Trianaid Conservation Association, which is a constituted body with charitable status, was established in 2009 by volunteers from the community of North Uist, with full support from Historic Scotland, for the purpose of conserving the ancient monument Teampall na Trianaid, situated in Carinish, North Uist. Teampall na Trianaid contains the remnants of one of the most impressive and well-known medieval church complexes in the west of Scotland, with some particularly rare and fine architectural features.

Although concerns had been raised about the monument's condition since at least 1986, and some minor conservation works had been carried out, there had been little success at drawing up a conservation scheme to address the church in its entirety until Teampall na Trianaid Conservation Assocation was established. Under the new scheme, plans were drawn up by Robin Kent Architecture and Conservation, a firm of architects accredited by Historic Scotland. The skilled lime masonry work was undertaken by Laing Traditional Masonry Ltd. The overall cost of the preparatory and conservation works amounted to £200,000.