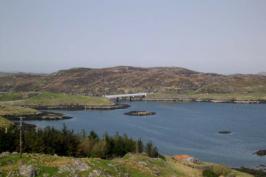 Comann Eachdraidh Sgìre Bheàrnaraigh (Bernera Historical Society) was founded in 1991. Membership consists of residents and exiles, and activity falls into two strands: Urras Eachdraidh that has trust status and deals with business matters and policy, and the comann eachdraidh, which arranges the social side of the society. The first project was to erect a cairn to commemorate the Bernera Riot. A day-long re-enactment of the events of 1874 began with the unveiling of the cairn and culminated in a celebration in the town hall. A 'Norse' mill was restored to working order and the lobster pond at Loch Risay was repaired. After excavations at Bosta, the society helped to build a full-scale replica of an Iron Age house which is open to the public daily during the summer season and attracts many visitors.

The society continues to research public records, gather local information and hold members' meetings. It runs a 4-star registered museum based in the Bernera Community Centre, housing all the records and artefacts belonging to the society. Exhibitions on loan from other museums are often displayed. The museum is open: