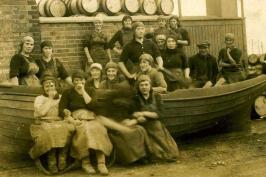 Comann Eachdraidh an Taobh Siar (CEATS) was one of the earliest groups of its kind to be set up in the Western Isles. Its aim was to have a small team of workers working in the local townships of Shawbost, Bragar, Arnol and Dalbeg so as to gather together a range of cultural items, stories and Songs which would help preserve something of the way people had lived there, especially throughout the twentieth century.

In 2003, a quarterly newsletter 'Fuaran' was established. Its aim was to share with the wider public some of our archived material and record local events. This has proved very successful and we are currently on the forty seventh edition.

CEATS started to research the croft history of the area in 2006 and two books of “Eachdraidh nan Croitean” were published in 2015. Uploading much of this research on to Hebridean Connections is now ongoing.